I remember the 1962 Cuban missile crisis when I gathered cans of food to store in our carport cabinets in preparation for nuclear war. We were supposed to stock our basements with water and food to consume after the bombs fell and we waited for the radiation to decrease.

Problem was, our house was small and we had no basement and thus no protection. With my 11-year-old brain, I tried to comprehend annihilation of the world as I knew it.

Now in my 60s, the feeling is eerily similar and equally unreal. We are approaching destruction of our biosphere, this time in slow motion but nonetheless terrifying. The cause this time is climate change.

The threat has ramped up dramatically since the inauguration of Donald Trump. His advisers and cabinet picks are fossil fuel company CEOs and shills who are dedicated to drilling and burning every last molecule of carbon left in the ground in order to ensure corporate profits.

This is the opposite of scientific dictates to immediately eliminate emissions to prevent geologic and climatologic feedback loops — albedo effect, melting tundra, carbon sink-filling — that will continue the process completely outside of our control.

On Jan. 28, over 600 people filled First Churches in Northampton. They came because there is rapidly growing recognition of the crisis. In the past, we could console ourselves that somebody else would fix it, but suddenly a whole lot of folks are realizing that our best resource for fighting this massive peril — the federal government —- is now openly fronting for the enemy.

What are we who love Earth and the coming human generations to do? I think we have several options that will require commitment, courage, time and energy. 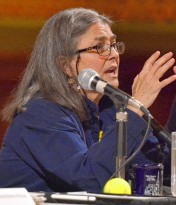 Do not give up on the federal government. We must limit the damage from the present regime and fight to replace it with those not promulgating “alternative facts.” Protest the blasphemy and carnage, building a movement that is interlocked with all others suffering from Trumpism: workers, poor people, immigrants, people of color, women, children, LGBTQ people.

Support nationally important legal and regional fights. The repermitting of the Dakota Access and the Keystone XL pipelines is a disaster for all of us and we must be willing to back up the resistance of those whose homes, culture and livelihoods are affected by oil, gas and coal infrastructure.

Put on your marching shoes. On April 29, come to D.C. for the second People’s Climate March, and respond to every invitation possible fighting for climate and justice.

Begin work now for the next critical election in 2018 when we must break the stranglehold that the fossil fuel industry holds on Congress.

Since much is blocked on the federal level, though, organize locally and statewide to make Massachusetts into a model for the rest of the country in climate justice.

Join an organization that is working on what you think is important.

It’s not over, folks. We have in Sandisfield an attempt by Tennessee Gas to build a storage pipeline through pristine Otis State Forest. Destructive, dangerous and unneeded, our resources should instead be spent on conservation and the expansion of renewable energy.

Become a citizen lobbyist to focus the Massachusetts State Legislature on the most important task it has ever undertaken, creating potent laws to stop emissions while establishing a just economy. Many such laws are being introduced right now, calling for rapid transition to 100 percent renewable energy while focusing the derived economic development/green jobs on so-called gateway and environmental justice communities.

Some bills restrict new pipeline building, two would create a carbon pollution fee, some divest state pension funds from fossil fuels, while others formulate funding for new green energy investment. They all need co-sponsorship by our state representatives now to become law. Contact your representative by Friday and ask them for co-sponsorship of all the bills endorsed by Climate Action NOW at https://docs.google.com/document/d/124lTZ7wEqoO7zTD-xKedS8qRLGumoMD4R90fRpFUAi8/edit.

I must repeat: This is the fight of our lives, folks. Through it we can not only literally save the world as we know it, but build community we are proud of.

Marty Nathan, MD, is a mother and grandmother who lives in Northampton and works at Baystate Brightwood Health Center in Springfield’s North End. She is a steering committee member of Climate Action NOW.